By the time the 1940s began, the Fleischers had already lost most of their unique style, “forced” to chase after Disney and, generally speaking, the West Coast style of animation. The Popeye shorts, the closest thing to the old Fleischer style, was mostly taking influence from other comedy masters around the same period such as Tex Avery, Bob Clampett, Frank Tashlin and the rest of the Warner Bros. animators. The Fleischer Studios would soon shut down in 1942, but before their departure they were able to provide their last shot with a new series starring a very popular character at the time: Superman.

The Superman shorts produced by the Fleischers between 1941 and 1942 are completely unlike almost everything else that has been produced before in the history of American animation. The first big difference is of course the genre of the films being produced: most of the shorts produced at that time, including the Fleischers’, were strictly comedies, but these Superman shorts were one of the very first attempts at producing almost completely action-oriented, dramatic films. There have been a few attempts at it, namely a short film called Peace on Earth (1939), directed by Hugh Harman and Rudolph Ising for MGM and, tracing back in time, The Sinking of the Lusitania (1918), directed by Winsor McCay. This is, however, certainly the very first attempt at producing a continuing series with dramatic mood and tone. In a way, these Superman short films are much more similar, at least in tone, to the science fiction serials that were being produced during the 1920s and 1930s such as Flash Gordon (1936) and Buck Rogers (1939), and are arguably even better than those.

Another big difference is of course the animation and drawing style, very faithful to the original comic books. There’s no place for extreme caricatures or ambiguity in the character designs here: the style is certainly much more realistic both in terms of appearence and movement of the characters, in accordance with the setting and tone. Unfortunately, this decision has many drawbacks: because of the complexity of the character designs, and because of the unexperience of the Fleischer animators at handling such realistic-looking characters, the character animation is often not very engaging. Drawings are often stiff, movements are reduced to the bare minimum to tell the story and rotoscope is often involved in many scenes. This is perhaps the biggest difference with the previous Fleischers’ productions: the animation, often the main event and element of interest in the Fleischer shorts, takes a backseat here and is no longer the focus.

The most impressive thing about the Superman shorts are perhaps the backgrounds and the great use of color. The backgrounds and sets that can be seen throught the cartoons have an Art Decò influence, often very geometrical and symmetrical. The general look and feel of these shorts also takes many inspirations from the Film Noir aesthetic that was being developed around this time in the United States, although with many differences. The film noir aesthetic is mostly based on sharp contrasts between black and white, light and darkness, perfectly representing the ambiguous characters and situations in the films themselves. In Superman there isn’t anything so complex; the characters are perfectly unambiguous and have perfectly clear, prefixed roles from beginning to end. Therefore, the contrast between light and darkness becomes a subject of Good Vs. Evil, with Superman obviously represnting the Good in contrast with the many Evil villains he’s facing in each and every short. Since the Superman shorts are in full Technicolor, instead of the classic black and white noir aesthetic, this contrast is achieved between lighter and darker colors in many scenes, such as blue and red. Finally, it’s worth spending two cents about Lois Lane and her role in these films, especially compared to other women in animation around that time. Lois Lane has certainly a more active role compared to many other female characters around that time, often being involved in many dangerous events, and she also a successful career. This is noteworthy especially compared to characters like Snow White which are definitely more passive, although less so than what many people may think. Of course the indipendence of Lois Lane is limited: despite her efforts, she still often plays the role of the damsell in distress saved by Superman in many shorts, and even her successful articles are still tied with Superman’s involvement. Nevertheless, she’s a step forward compared to many of her contemporaries. 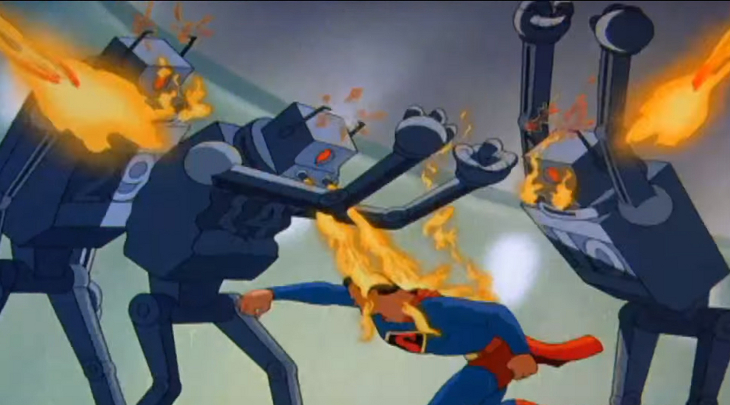 Even though the Superman series was short-lived, lasting about three years,  its legacy lived on. Among the many admirers of these shorts there’s Hayao Miyazaki, who even “stole” the designs of the robots from The Mechanical Monsters (1941), the second entry in the series, re-using them for an episode of his Lupin III (1977 – 1980) series and for his feature film Castle in the Sky (1986). American animator Bruce Timm and his team looked back at the Superman short during the making of Batman: The Animated Series (1992 – 1999) and Superman: The Animated Series (1996 – 2000), taking inspiration from the same Art Decò and film noir-influenced aesthetics. Unfortunately, it had no immediate effects on the animation industry, since very few studios would ever try to do something as ambitious with their short films. Perhaps the closest attempt, at least in terms of dramatic tone and intensity, has been the short film Education for Death (1943), a Disney short produced during World War II, although it’s of course very different from what the Fleischers were attempting to do.

The Fleischer retrospective pretty much ends here. I won’t be talking at length about Mr. Bug Goes To Town (1941), the last feature film from the Fleischers, since I don’t have a lot to add that I haven’t already stated in my Gulliver’s Travels (1939) review. This feature film is slightly better than Gulliver, namely thanks to the absence of rotoscoping on the main characters which brought down Gulliver, but it mostly remains a mediocre film which is still trying to chase after Disney. The animators are apparentely more comfortable with antropomorphic animals, but none of the characters are really distinguishable or interesting enough to carry on an entire feature and there’s almost no trace of the old Fleischer style.

The Fleischers were certainly at their best during the early-to-mid 1930s, and their value was precisely in being so different from what Disney was trying to do. The difference between the two studios is pretty much the same difference that there is between watching a play in a theatre and an illusionist’s show or a circus. Where one tries to tell a coherent story with engaging characters and, most importantly, engaging performers, the other one is more interested in providing a big spectacle for the audience. That’s what the early Fleischer films were: a visual spectacle, where the animation itself didn’t really serve any purpose other than being entertaining by itself. With the Fleischers gone, this conception of animation would practically disappear. Even though other artists would take some influence from the Fleischers (namely Tex Avery and Bob Clampett at Warner Bros.) and even though their influence can be seen in many other modern works, with the most notable example being the TV show Adventure Time (2010 – 2018), this “pure” approach to animation has never really been equaled.

View all posts by Frank Beef